Epidexipteryx is a small sized theropod dinosaur that lived in what is now China during the Early Jurassic Peroid. One of the most newly discovered Dinosaurs with feathers as of Planet Dinosaur airing, Epidexipteryx evolved 34 Million Years before Microraptor. It indeed was a strange and unique dinosaur: At 45 cm in length it was one the smallest dinosaurs ever discovered. Due to its small size, its diet was probably small insects, worms, and larvae. It had a distinctive short snout sporting small dagger-like teeth, large eye sockets, and a relatively short tail with four long tail feathers. But Epidexipteryx's most stunning feature was its incredibly long fingers or digits: its second digit was much longer than the first and the third digit was much longer than the second. The third digit alone was almost half as long as the dinosaur's body! Epidexipteryx's strange anatomy gave scientist the logical idea that the tiny dinosaur lived strictly in the trees,perfectly adapting to forest life as well as to avoid predators. It is also possible that Epidexipteryx would have made a nest before laying and incubating its eggs like a modern bird. Its long fingers enabled the animal to climb trees while gripping firmly to the tree trunk. The long fingers were also used to snatch worms and larvae in the tree holes.Fossil evidence also prove that epidexipteryx also sported tiny fibers, keeping the animal warm during cold winters. The four long tail feathers were probably used for display toward mates and intimidation toward rivals. Its adaptation to the trees also has some downfalls however: once on the ground, Epidexipteryx's short forelimbs and long front limbs makes walking very difficult, thus making it an easy target for predators.which are seen today on most modern birds. Epidexipteryx was shown in the episode " Feathered Dragons" when two male epidexipteryx competed for territory and for food. However, when one of the males climbed down the tree to eat a fallen larvae, it was unaware of the dangers on the ground and got killed by a young sinraptor. 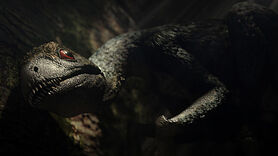 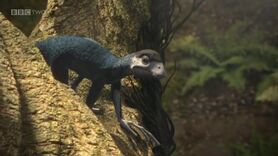 Add a photo to this gallery
Retrieved from "https://bbcplanetdinosaur.fandom.com/wiki/Epidexipteryx?oldid=5790"
Community content is available under CC-BY-SA unless otherwise noted.